A Year of Thanksgivings: A Memoir 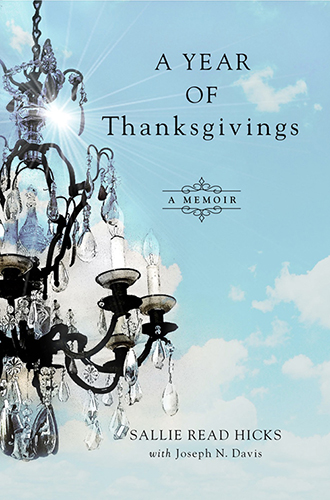 When the co-author of a Nashville family’s history wanted to publish under his own imprint, Dexterity provided publishing consulting for every step in the process, as well the perfect team for professional, editing, graphic design, and typesetting services.

Through the whole process and beyond, Matt and his team have been extremely diligent, responsive, friendly, and good at what they do. Matt knows his subject well, yet he enjoyed helping me learn the basics of book publishing in the twenty-first century. Through it all, Matt has had a sunny disposition and a keen sense of humor, without which the whole thing would not have been nearly as much fun.

In A Year of Thanksgivings, Sallie Hicks shares with her readers seven generations of the Hicks and Read families as she has known them for almost ninety years. In stories that span from her early childhood memories to encounters with life’s heartbreaking challenges, Sallie tells how, despite significant visual impairment, she has navigated her life with remarkable optimism, strength, and resilience. In this moving account of how her family came to be and who it is today, Sallie extends an irresistible invitation to all to pull up a chair for a few minutes of conversation with a lady who, before you know it, is sure to become a trusted friend. Mrs. Hicks’ attitude is contagious, and readers will likely find that her thanksgivings will inspire new gratitude in themselves.

Because of a congenital eye condition, Sallie Hicks learned at an early age that she could not do many of the things girls her age took for granted, like team sports and seeing the blackboard in a classroom. Instead, she decided at an early age to “go down roads that were open to her.” Enabled by remarkable storytelling gifts, for decades she has kept alive the memory of her forebears, and she has preserved the family stories that she helped create as the wife of prominent real estate developer and homebuilder George T. Hicks and mother of five daughters and one son. When asked to describe her life’s work, she says that being a wife and mother to her family was “the point of the whole thing.” Now in this book made from a series of interviews, she passes on a treasury of family stories and, along with it, her unforgettable personality and inspiring attitude towards life. Sallie lives in Nashville, Tennessee, with her dog Murphy in a home she shares with her daughter Susan. From the sitting area of her bedroom, she rejoices in the steady flow of new stories about her growing number of great-grandchildren.

Joseph N. Davis grew up listening to memories recounted by elderly family storytellers from Tennessee and Mississippi while those around him said, “Somebody should write these stories down!” After organizing and editing his father’s memoirs, he launched Talking Tree Tales in 2015 and began helping other people tell their stories. A graduate of the University of the South, Joseph taught English at Webb School of Knoxville before attending Nashotah House Theological Seminary and being ordained to the Episcopal priesthood. He currently serves as vicar of Grace Episcopal Church in Spring Hill, Tennessee. Reading, playing tennis, and early American music are among his favorite activities. He and his wife Cindy have two grown sons and live in Nashville with their dog Bo. As a friend of Sallie’s son George since fourth grade, Joseph considers it an honor to have worked with Sallie Hicks to preserve her memories and reflections. A Year of Thanksgivings is his first published book.